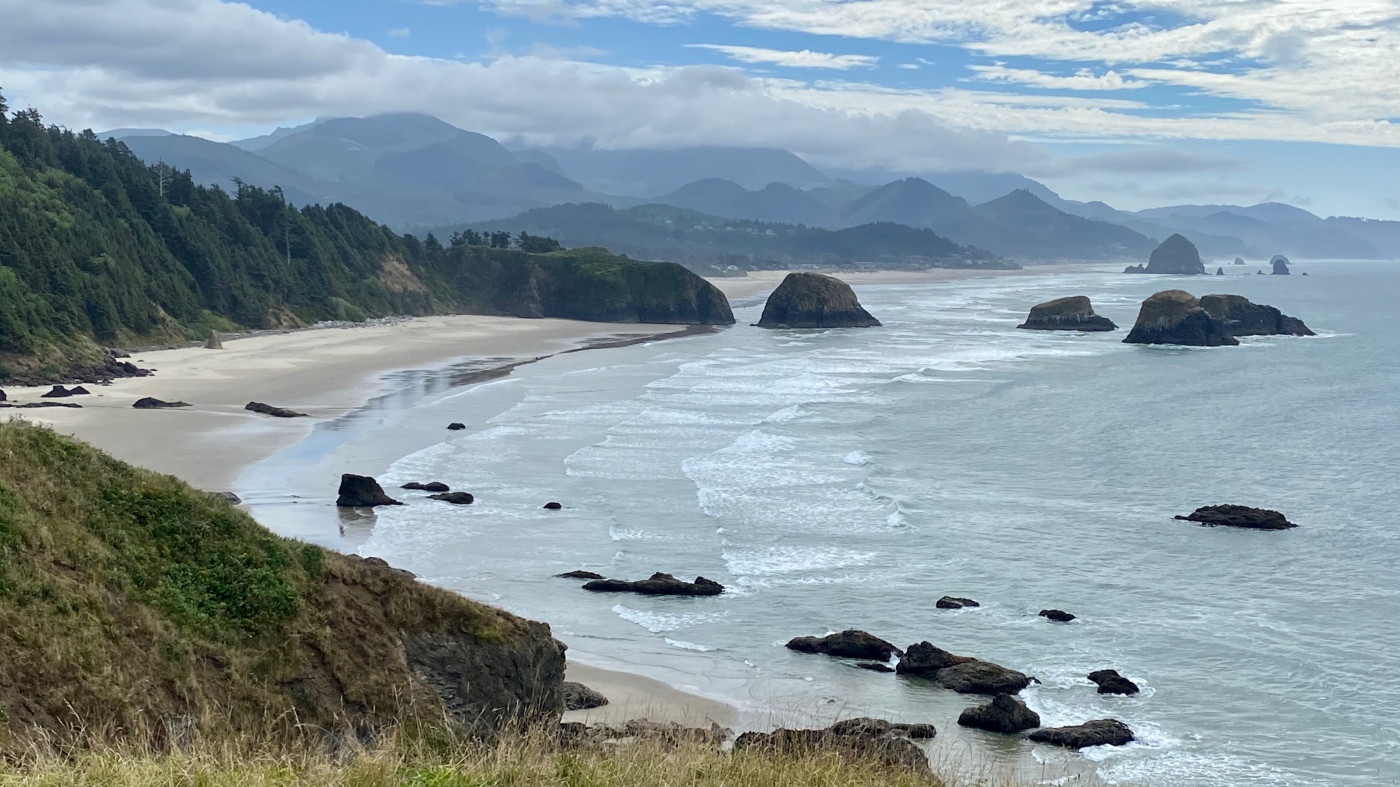 We drove from Anacortes WA to the Oregon Coast where we would visit Astoria, Seaside, and Cannon Beach. We found that each town has its own charm.

We crossed the iconic Astoria-Megler bridge over the Columbia River to enter Oregon. It’s the longest continual truss bridge in North America.

Several boats we positioned in the water just in front of the bridge fishing for salmon.

We stayed in Warrenton at the KOA, which is just across the street from the Fort Stevens State Park.

The State Park has great bike trails which we enjoyed riding on each day of our stay.

The trails go through forests and marsh,

on the way to the beach, where the remains of an old shipwreck can be found, or to the jetty at the mouth of the Columbia River (closed for construction), or to the bunkers of an old military fortification, initially constructed during the Civil War.

It was easy to ride 15 miles all within the park, as you can see in the map below,

We explored Astoria by visiting the Astoria Column, walking along the riverfront, and taking in a hike at Fort Clatsop.

The Astoria Column is on a hill with great views of the bridge and rivers. Here, again, is the Columbia River and the Astoria-Megler Bridge.

The Astoria Column was built in 1926 by the railroad. It’s very interesting to look at because of the detailed mural painted with scenes from the early history of Oregon, starting with the Native Americans and the Lewis and Clarke Expedition. “Unrolled”, the mural would be 12 feet by 525 feet! Here’s a link to the entire mural, since you only see one side in the photo. Though the stairs to the top were closed due to COVID, it was still worth the visit.

Next, we went down to the walkway along the riverfront. We enjoyed eating a snack while watching the ships navigate up the river.

By the way, the posts in the river are all that’s left of a building that once stood above them. In the old days, the riverfront was full of businesses built right over the water!

A popular destination here is the Columbia River Maritime Museum. It was open, but we decided to stick with outdoor activities this trip.

From this exhibit, which I could see through the window, I definitely want to visit the next time we are here.

We enjoyed a good cappuccino and pastry at The Coffee Girl,

which sits over the water on a pier that used to house a cannery.

This is what it was like in the “old days”.

We finished the day by visiting Fort Clatsop National Historic Park on the Lewis and Clark River. The Expedition completed its westward journey at the mouth of the Columbia River, and Fort Clatsop was built to winter over before heading back east.

Since most of the fort was closed, we went on a hike along the river to Netul Landing.

It was a beautiful hike!

Seaside has a very large white sand beach with a promenade that stretches the length of it lined with businesses and residences.

We stopped for some delicious clam chowder at Mo’s…

…before a long stroll along the promenade and beach.

A little further south is Cannon Beach. Cannon Beach has many nice shops and restaurants, but our favorite stop was at Ecola State Park for this magnificent view. This is what I think of when I think of the Oregon Coast. Yep, this one may go on a wall.

Of course everyone who has seen Goonies is familiar with this view, since several scenes were filmed here. 🙂

We only spent four nights here, and we left definitely wanting to return again. However, our last stop in Oregon was further down highway 101 in Newport, where we would relish staying in one place for an entire week.