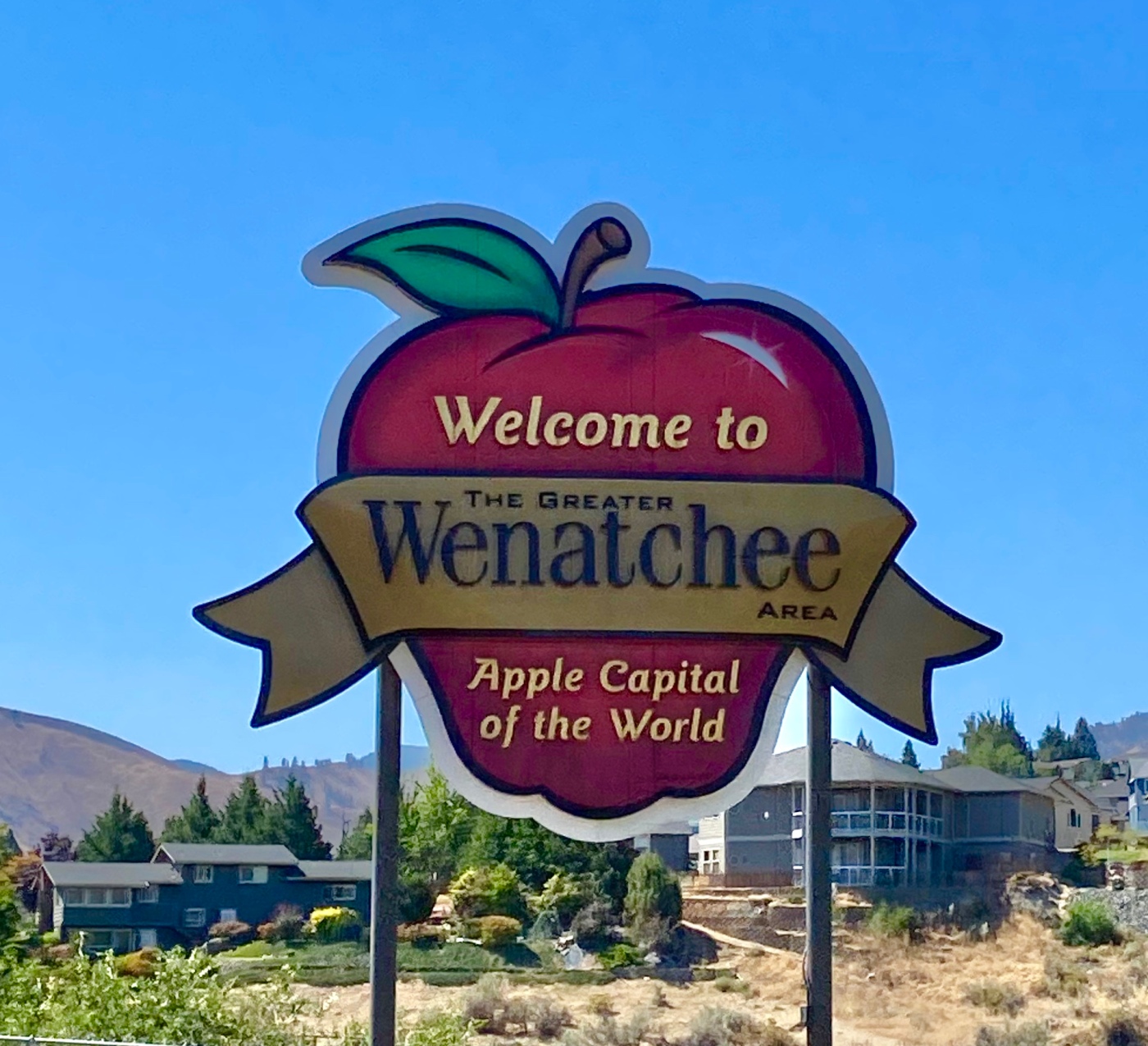 The drive from Winthrop to Wenatchee was really beautiful, though very different than the drive into the mountains to get to Winthrop. Instead, you follow the Methow River as it slowly winds its way down from the mountains. Its a hot and dry area, but the river gives life to the Methow Valley, which is known for growing delicious apples. In fact, Apple fields are everywhere, along with a surprising amount of infrastructure that’s needed to get them harvested and to market. As we were driving this route, I was thinking that this is why we love to travel by motorhome.

The Methow River finally empties into the mighty Columbia River, which you follow till you get to Wenatchee.

We passed by Lake Chelan this time, but would like to make a trip there in the future.

Wenatchee is known as the Apple Capital of the WORLD, and I believe it! You see signs of their apple heritage everywhere,

and the apples are absolutely delicious!

A great way to see Wenatchee is from the the Apple Capital Loop Trail, a 10 mile bike path that takes you along both sides of the Columbia River.

It’s a beautiful ride and I was surprised at how varied the view form the trail was as I rode along. You begin on the western bank of the Wenatchee River riding through several riverfront parks,

then cross the Odabashian Bridge to the east side of the river,

which is much more wild and natural,

and provides a picturesque view of downtown Wenatchee.

You finish the ride by crossing back over the Columbia River on the Pedestrian Bridge, the first bridge to span the Columbia back in 1908.

It was a fun ride and well worth the effort. While in Wenatchee, you can also take in several good restaurants and antique shops.

I should mention that we actually stayed in Leavenworth for two nights and took a day trip to Wenatchee. We love Leavenworth, but we have been there before and we were trying to avoid crowded areas.

Also, the next time we pass through, we will try to stay in Wenatchee at the Wenatchee Confluence State Park, which has a nice RV park. It’s convenient to everything and the spaces looked clean and spacious.

Only two days here and we were wishing we had planned a week! However, it was time to move on to Anacortes, WA, and complete our trip around the Cascade Loop.

We were looking forward to visiting the beautiful little town, getting to spend time with family, and kayaking in Bowman Bay.